For many, Alzheimer’s disease is an especially dreaded illness–not only because of its symptoms but also for the fact that it’s virtually incurable. There is some good news, however: new research shows certain factors can lower your risk for Alzheimer’s. There are ways you can naturally prevent the onset of Alzheimer’s disease.

A study published in the Journal of Neuroscience showed a diet rich in folic acid can protect the brain from damage associated with Alzheimer’s disease. The study was conducted by the National Institute of Aging, and showed folic acid aids in the repair of DNA damage that occurs in the brain. This damage is linked to Alzheimer’s. Folic acid also lowers the levels of homocysteine in the blood, and high levels of homocysteine can nearly double the risk of Alzheimer’s. Folic acid is a B-vitamin found in leafy green vegetables and citrus fruits.

Activities that stimulate the brain–such as reading, playing a musical instrument, dancing, playing cards, and solving puzzles–were shown to lessen the occurrence of Alzheimer’s in people over the age of 75 according to a study published in the New England Journal of Medicine. The study was led by Dr. Verghese, who reported that more time spent doing such activities further lessened the risk of Alzheimer’s. 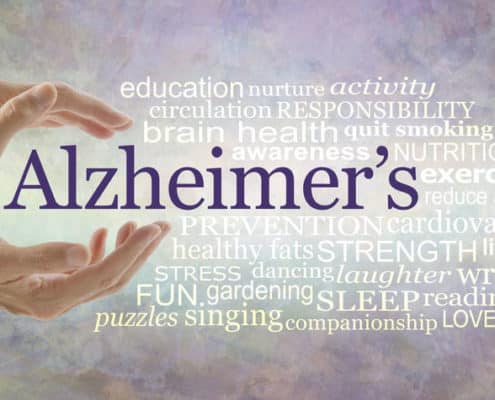 Metal contaminants can increase your risk of dealing with Alzheimer’s. The National Institute of Health found that aluminum can cause neurological damage associated with Alzheimer’s. Avoid excessive exposure to aluminum by limiting your use of aluminum cookware and certain antacids, aspirins and antiperspirant which contain aluminum.

A study published in the journal Neuroreport identified mercury as another metal linked to Alzheimer’s. The study reported damage to the nervous system caused by mercury is very similar to the damage that occurs in Alzheimer patients. You can lessen your exposure to mercury by avoiding vaccines with the preservative thimerosal, ocean-caught seafood and amalgam dental fillings.

Maintaining a healthy lifestyle that keeps you within your recommended weight range can lower your risk for Alzheimer’s. Information presented at the 2006 meeting of the American Academy of Neurology showed people who were at a healthy weight in their 40’s were less likely to show signs of Alzheimer’s later in life. The opposite was true for those who were overweight in mid-life.

Part of maintaining a healthy weight is exercise, which is also linked to the prevention of Alzheimer’s. Being regularly active can help you maintain brain function as you age. Dr. Ronald Petersen, the director of the Alzheimer’s Research Center at the Mayo Clinic, recommends exercise as one of the best natural ways to prevent Alzheimer’s.

Parenting a parent
Scroll to top